There are some interesting parenting challenges when you have multiple children. Let’s discuss the oldest child!

The oldest child is:

Bossy- Thinks they are the parent 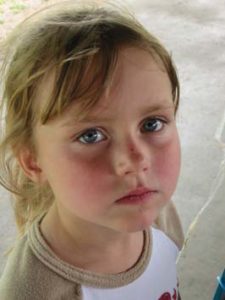 What oldest child hasn’t been called bossy? No matter what you do they tend to want to be a little bossy, but with good reason. They are older and they have learned so much about what to do and what not to do. However, there are probably things you are doing to contribute to their bossiness.

Are you always sending them to tell, demand, command, threaten, etc the other children, for you? When any child is being told to do these things for you it isn’t long before they do it without your prodding. They are frequently put in a position to command, demand and threaten their siblings, by you. You are pretty much telling them to go be the parent for you.

How about when the oldest tries to let you parent by letting you know what is afoot and you send them back with a message: “Mom, said________________”  The oldest is your assistant, the one that “handles” the situation for you and delivers your messages of appropriate behavior as well as consequences and warnings. Often, it becomes easier for the oldest to just tell their siblings what to do because they will be sent to tell them to do it, anyway. They just cut out the “middle mom/dad”. They are doing your job! You are unwittingly turning your child into the 3rd parent. You are always telling them to tell everyone else what to do and what will happen if they don’t obey. The oldest has consequences for not following your orders and for not getting the younger ones to fall in line. The oldest is often put in this situation and then is called bossy.

Don’t- Send them to do your job. If a child needs a warning or a punishment, it should come from the parent.

Don’t- Create sibling rivalry by pitting them against one another.

Don’t-Make them the messenger or the tattle-tale (spy)

Do- Ask your kid to help out in reasonable ways and at reasonable times.

Do- Be the parent to all of your kids even if you are tired or visiting with friends and family. It’s not your oldest’s responsibility.

Do- Remember that while your oldest is older and wiser than the other kids, they are still kids. They will make mistakes.

Do- Remember that while you have this great helper, you are still the parent and don’t burden them with your responsibilities.

Do- Remind them you are in charge and you will take care of it. (And then do it.)

The Boss often has a Secondary Role as the Sheep Dog 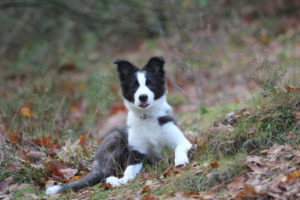 The oldest child often becomes the helper/assistant. You ask them to get and do things for you, frequently. Parents often become dependent on the oldest child getting up and doing what they themselves don’t want to get up and do. Things they would get up and do with the first child, they delegate to the oldest. Some of this is appropriate. Older kids should learn to help out. I am talking about expecting them to be at your beckon call whenever you want them regardless of what they are doing and what is going on. You want them to stop whatever they are doing and help you, so you can continue your conversation or whatever it is you are doing. What makes you think your child is any different? Demanding that your child come running every time you call; is that how you like to be treated?

Do you have them “herd” the other children? I see older siblings carrying screaming younger ones, or pulling them, fighting them all because they were told to take the sibling to a parent. I don’t think this is a good way to encourage sibling love. Who’s responsibility is it really? Be careful you aren’t treating your oldest like the family sheep dog whose responsibility is to fetch and herd everyone else.

Don’t- Make them your slave or dog who is expected to fetch and herd when you just don’t want to.

Don’t-Delegate your responsibility to your child.

Don’t- Be a lazy parent.

Don’t- Make it harder for your children to form loving relationships with one another.

Don’t- Expect more of your child than you do of yourself.

Do- Ask your other kids to help you out once in a while. They need to learn to be helpful too.

Do- Teach your kids to help out and why. We help out because we are a family and we love one another.

Do-Be respectful. Children need to be respected so they know how to respect others.

Do- Do unto others as you want others to do unto you.

Do- Remember your child is a person with feelings, wants, hopes and has things they enjoy doing. They don’t like to be interrupted when they are busy, engaged or in the middle of something, anymore than you do.

*I remember one time when I asked my 2nd daughter to get me something and she said, “Can’t #1 get it? Why do I have to?” I answered that she could get it because she is the one I asked and I expect her to help out. I reminded her that #1 doesn’t have to do everything and she can help out, too.

What are their options? Kids don’t have a lot of options and are at your mercy as to what you will or won’t allow.

Do you expect them to let you know when someone is being naughty and doing something they shouldn’t be doing? Where is that line? How do they know what and when is appropriate to tell or not? Here are the rules we set for our family to help our girls know when it is appropriate to “tattle” 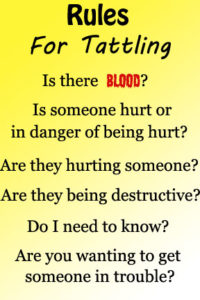 *One time we left #1 to babysit. When we got home, #2 came with her hands on her hips to let me know that #1 made them do everything while #1 did nothing! 1st I told #2  I wasn’t happy with her tattling like that, trying to get her sister in trouble. However, I did appreciate knowing there was a problem that needed some correcting. Then I asked #1 about what had gone on. I couldn’t help but laugh when she did this little shrug and said, “I was being the foreman.” Then, we had a little chat about it not being her job to make everyone else do what she wanted. I explained to my oldest that being “in charge” wasn’t being the boss. Being in charge is simply making sure everyone stays out of danger. If siblings chose to misbehave I would take care of it. Each child knew they were responsible for their own actions.

Don’t- ignore the problem because one tattled. Hold each child responsible for their own actions.

Don’t- Leave them to figure it out for themselves on how to handle the situation. Give them guidance.

Do- Sometimes get after both the tattler and the one being naughty. Especially if you know that one just wants the other to get in trouble. However that doesn’t mean naughty behavior gets a break! Be clear about what they did wrong and what they should do next time. If you don’t tell them how to behave differently, they will continue with what they are doing. It might take practice.

Do- Give clear directions for what you want and expect. You want your kids to talk to you and not be shut down. If they feel shut down when they come to you, they may stop coming. There are times that it is appropriate to “tattle”.

Fighting and Arguing- Not getting along with siblings

There are many reasons for this and it isn’t just the oldest child being the problem. Fighting and arguing often occur when children are either over or under stimulated. Sometimes the routine needs to be broken up. Sometimes what they need is more time from you or your spouse. I have another great post about time, here. 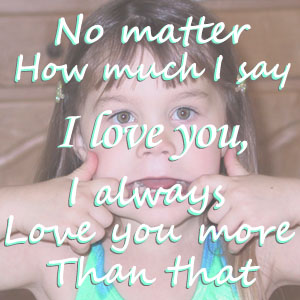 Some of this could be the result of turning your oldest into the enforcer? My parents actually used to say, “You are older than they are and bigger than them; make them do it.” How do you “make” someone do something they don’t want to do? Is your oldest expected to keep the rest of the kids in line and make sure they are following the rules? How does a kid judge and know where those boundaries are? They may be clear to you, but kids don’t know; they are learning and trying to do what you want them to do. They have nothing they can hold over the sibling nor do they have the power or responsibility to give punishments, assign extra chores, or take away privileges, nor should they.

Don’t- Yell, hit, call names (If you don’t want your kids to do it, then model appropriate behavior for them. Kids learn the most from example.)

Don’t- Make your child the enforcer

Don’t- Put your kids in a position where they “have to make someone do something”.

Don’t- Put the family harmony all on one child (oldest or otherwise). Children acting out is a symptom that something in the family needs to change.

Do- Review how much responsibility you are putting on them.

Do- Be clear about the rules and don’t break them because you are too tired.

Do- Make each child responsible for their own behavior and actions. 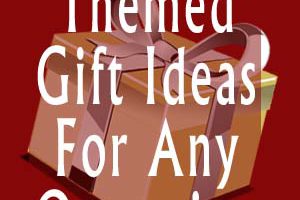 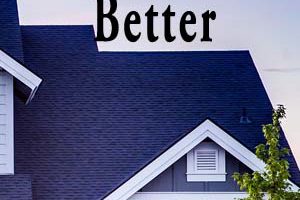 Why Cooking Gluten Free At Home Is Better 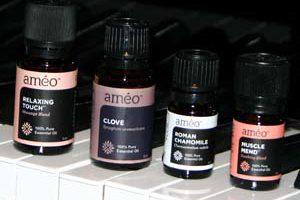 Relax Your Shoulders With These Essential Oils

My daughter is a pianist and practices a LOT! Her[...]