Comfy, warm and pretty scarf. This pattern is similar to a honeycomb, in the way that it forms pockets. Even if those pockets are more diamond like instead of octagon shaped. I love the way this turned out! This is a more advanced pattern to make.

Look at how much pattern and texture there is in the Honeycomb stitch. 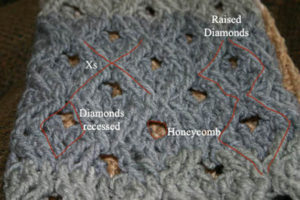 Multiple diamonds, illusion of Xs, raised squiggles that run against one another forming diamond shapes and the honeycomb holes. 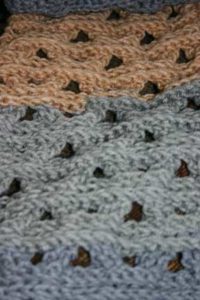 This yarn is so much fun to use as it goes from one color to another. The backside of the scarf.

Needles to sew the yarn ends in with.

Scissors for trimming ends after sewing the ends in.

ch-A chain doesn’t go through a stitch. A chain is made by starting with a slip stitch or if you are in the middle of a piece and it calls for a chain you yarn over and pull through the one loop that is on the hook.

fp=Front post this means that instead of crocheting in the top of the stitch like you normally do, you put your hook around the front of the dc post and create your stitch there. (It’s a lot like weaving with your hook, around the post, starting on the front side of your piece.) 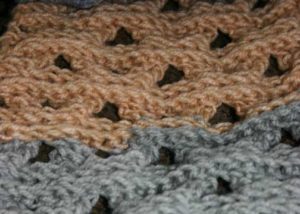 This is the backside of the scarf. It has ridges from crocheting in the front posts.

bp= Back post, insert hook around the back of the post instead of crocheting on the top. You have the piece facing you but crochet on the opposite side. This makes a ridge on the front side.

dcbp and trfp are combining the stitch and where that stitch is made. So, dcbp means to double crochet in the back post.

Trfp means to triple crochet around the front post. 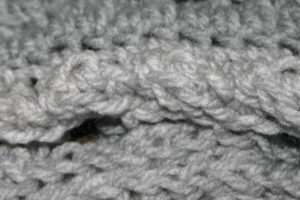 sc in last sc finish off.

Finishing the end where your project began.

With right side facing you, join, sc across (26)