Our goals in visiting Garden City for Raspberry days were to get fresh Bear Lake Raspberries, enjoy raspberry shakes, and go out to Bear Lake. The best time to do this is the first weekend in August, when the city is celebrating Raspberry Days. Of course, Bear Lake is fun anytime during the summer, but there is a lot to do and see during their city celebration.

Unfortunately, I didn’t take as many pictures as I should.

Garden City, Utah is located in Northern Utah. To get there you first need to make your way to Logan, Utah. From there it is only about a 45 minute drive to Garden City. The road into town will end at a 4 way T (if you go straight, it is into a parking lot). Just before getting to the stop sign, you will see carnival rides and many, many vendor tents.

Garden City’s Raspberry Days celebration is one of the best city celebrations we have gone to! They have a large quantity of booths, a great variety of vendors and many food options (especially, if you aren’t gluten free, not as many options if you are gluten free).

If you want to really have an adventure, try sleeping in a Conestoga wagon at the Conestoga Ranch! They have a lot of options and a great restaurant (must make reservations). The atmosphere is awesome!

You can’t go to Garden City especially during Raspberry Days without getting a raspberry shake! You will see many places advertising raspberry shakes and one that has the claim of “Most Famous Raspberry Shakes”. The line there was unendingly long and slow!

So, off the beaten path we went and found: 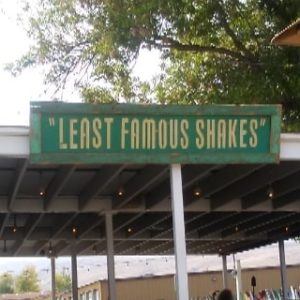 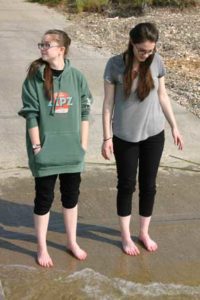 Why not?!!! They were pretty good! This cute little place is called Zipz. They also have a pretty good strawberry lemonade. They have a fun atmosphere too! If my kids were younger they would have loved sitting at the boat tables! 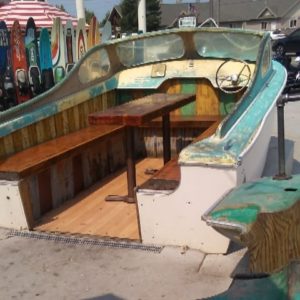 We wanted to go down to the lake, but we had our dog with us. Some of the beaches don’t allow dogs on them. So, we decided to go for a drive and see what we could find.

We stopped at the Visitor’s center, but by the time we got there (since this was an afternoon adventure) it was closed. I think it closed at 4:00 p.m. So, just before we made it there.

We found the next beach place that allowed you to take pets on the beach. It is a state park and they charge $10.00 for the day. We were bummed because we only wanted to be there 30-60 minutes. The girls thought it would be fun to drive all the way around the lake and see what we could find. They also wanted to go into Idaho, since part of the lake is in the next state.

Turns out, until you get to the south east side and the south west end, there aren’t any free beaches that allow pets. In fact the majority are run by either Utah or Idaho and charge $10.00 a day. Not bad at all if you are spending the day. There are some nice beaches to play on.

We started on the west side and made our way north. We were more than 1/2 way around the East side when we ran into signs saying the road was closed. Seriously?!!!! This should have been a warning before going so far around the lake! Ughhh. We had to make a decision do we try the “closed road” it didn’t look bad at all.

We decided that rather than turn around, after having come so long, we would go for it! No one was out doing road work. There were campsites all along the way where people were camping. So, the closed road wasn’t really that closed.

Eventually, we hit dirt road. It was pretty rough in our mini van, but doable (everything is doable in the mini van, as far as my husband is concerned.). We took it slow and it was a very pleasant ride. Until all the dirt got stirred up from big trucks passing us.

There was an awful lot of smoke in the air, much of it being blown in from the California fires. Then we had the dust from the dirt road. I don’t have asthma attacks very often, but it all got to me. I was miserable! Thankfully, my daughter had brought her essential oils along. I was able to apply soothing air to my throat and chest and it calmed it right down! Thank heavens. This could have been really bad.

We found a place where people take their boats and put them into the lake. We decided to stop there and use the bathrooms, stretch our legs and dip our toes in the water. 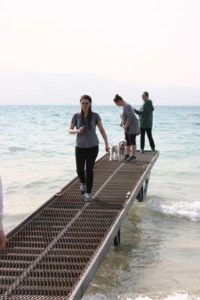 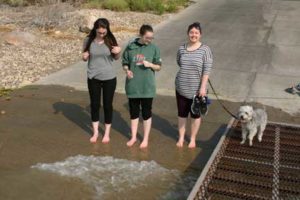 Sometimes I think my dog is part cat. She thought the water was too cold.

Here there isn’t much of a beach. If you walk a little farther north of the boat dock, there is a picnic table and a little bit of a beach. However, where we were it was very rocky. 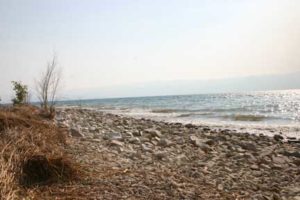 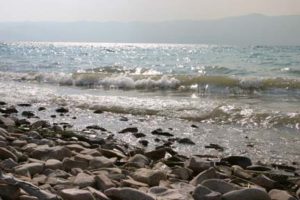 The water was really choppy

Turns out had we turned the other direction and headed south first, that is where all the access is located. There are more free beaches with pets allowed! We were pretty tired by the time we made it around the lake. We were ready for some real food and I wanted a flat of raspberries to bring home!

We went back to the vendors and unfortunately the one we wanted to buy from, sold out 15 minutes before we got there. Luckily, there was another vendor, but theirs didn’t look as good as the other guy. Still, I was glad to get my flat of raspberries! When we got home I washed and dried them and put most of them in the freezer.

One of my favorite things to make with fresh raspberries is raspberry lemonade!

We didn’t find a lot of places that we felt were very safe for doing gluten free food. Part of the reason for this is because we have one daughter who hates Mexican food. There was a very safe Mexican restaurant, but she wouldn’t go for it. No one had gluten free French fries.

So, we did dinner back in Logan at Chick-Fil-A. French fries are safe and we could eat outside with the dog.

For us this was a much needed, laid back adventure. It would be so much fun to stay in Garden City, sometime, and rent some water equipment and play on the beach! There are several places to rent equipment. 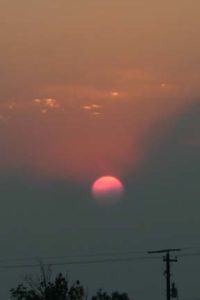 The sunset in Logan, Utah was amazing! We didn’t have our good camera with us, but the sun was a brilliant bright red! As difficult as the smoke was, it sure made a beautiful sunset!