It is so much fun to travel and see new places. A time to get away from everything and relax. However, when you have dietary restrictions, you must prepare for dealing with those restrictions. Preparing can help things to go smoothly, there are enough things to worry about as it is.

Preparing for the trip

I look up our route and check out FindMeGlutenFree, to see what is available on our way. This helps me to know how much food we need to plan for in the car.

It is always nice to be prepared with extra snacks just in case it turns out to not be what you expected, have car troubles or traffic along the way.

You want to have some portable snacks with you. If your flight is delayed, you may need something to snack on. At times, people have been delayed on a plane waiting to depart or waiting to unboard a plane. While there may be snacks available on the plane for all passengers those snacks may NOT be gluten free.

Make sure you read ingredients before snacking. Often times the nuts served on airlines are NOT gluten free. Be sure to purchase a bottle of water or fill you water bottle after going through security.

When booking a hotel we look for the following things:

It is helpful if the hotel offers some gluten free options like eggs, breakfast meats, yogurt, fruit and juice. We often take our favorite box of gluten free cereal and either purchase milk (near our hotel) or get milk from the hotel breakfast area. We also take paper bowls and plastic spoons. (We never eat the cereal from the hotel breakfast, too risky.) I also order muffin tops from our local area that does great gluten free muffin tops. (Udi’s muffins are another option.)

If there is a fridge and microwave we can plan other meals and take bread, lunch meats, cheese and condiments. Sometimes it is nice to purchase these things when you get to the area. However, depending on where you are going, you may not be able to find safe options or the brands you like.

Sometimes we travel lighter or don’t have the room in the car and if you are flying you certainly can’t take a lot with you. Look up what grocery stores are close to your hotel and know where you can shop. Another option is to talk to the hotel about what is close by. Not everything you want to take, is going to travel well, so it is good to know, even if you are prepared.

We have a Costco membership and we are huge Costco fans! We look up where the Costcos are in the area we will be visiting and plan time for a Costco run. This way we can stock up on fruit, yogurt and other basics during our stay.

Contact the local support group in the area, you are heading. Many Gluten Intolerance Groups have facebook pages throughout the country. I asked on one of those pages for referrals to good/safe gluten free places to eat while we are in town and got so much good information!

Sure, you can use the Find Me Gluten Free App (which I love), but getting referrals from people who live in or near the area is priceless. They can also give you extra details like if they have weird hours or are family friendly. Not to mention, favorites on the menu. You also get to see how often the same places are mentioned, liked and agreed upon as well as other places some people may have had unfortunate experiences at.

Some trips go easier when there is a menu plan. Knowing what is for breakfast or at least what the options are as well as each meal during the trip.

I print out a master list, because that is what works best for me.

The fun is just beginning, now!

Once all of that is done, it’s time to prepare like other people do. Time to worry about getting the laundry done, packing and making sure everyone remembers shoes and swimsuits.

Is there someone to take care of the dog, the mail, watch the house, etc. Making sure the house is clean enough to leave and so on and so on.

Chef Aaron Flores, A Legend in the Gluten Free Community

Chef Aaron Flores became my hero shortly after I was diagnosed with celiac disease. He had been a chef at Disneyland, California in the Story Teller Cafe. He has been a great advocate for the gluten free community. You may not know how he has affected your life. If you have had great food at Disneyland, he was the pioneer! He also helped with gluten free menus for many other places including his work at Hilton (if I remember right) and Marriott.

His resume is very impressive! It includes things like cooking for the Obamas in the White House and holding the title of Executive Chef. There’s so much more, but I am unqualified to list them. Within the gluten free community, he: helped to build the largest gluten free cake, spoke at celiac conferences, and was a pioneer in gluten free cooking and products. He also helped with the FDA labeling laws for gluten free foods.

My 1st Introduction to Chef Aaron

I was worried about how we were going to go on vacation and if there would be anything there I could eat. I was a part of the Gluten Intolerance Group of Utah County and the Branch Manager told me a wonderful story about an incredible chef who had worked at Disneyland! What a relief to know that people were looking out for those of us who have to be gluten free!

I went from thinking there were few, if any, vacations in my future to feeling relief that there was one place I could safely go.

I have recently heard this story with differences in the details, told by other people. (The biggest detail difference has been what he made for the little girl. I remember being told it was bland eggs and someone else said it was bland chicken with bland steamed veggies. In any case, it was bland.) This is the way I remember it.

Chef Aaron was busy working in one of the Disneyland kitchens, Story Tellers Cafe. A grandmother came in pulling her large rolling suitcase with her, accompanied by her young granddaughter. The grandmother sent a card to the kitchen about her granddaughter’s dietary needs.

Wanting to know more, Chef Aaron came out of the kitchen and talked to this woman and her granddaughter. She explained to him that her granddaughter has celiac disease and how she couldn’t eat gluten. Her suitcase had been packed with food for her granddaughter, but they had run out and she needed to eat. Chef Aaron’s heart went out to them. He said he made the most bland eggs for her because he didn’t want her to get sick.

He talked to people and made it his mission to develop recipes and options for people who are gluten free so that everyone can enjoy Disneyland without having to worry about what they can eat. 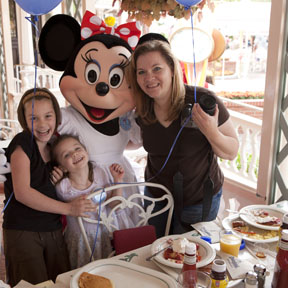 Minnie and Friends Character Breakfast with the BEST gluten free pancakes, ever!

It was amazing! Chef Aaron no longer worked there, but he left wonderful things in place! We had fantastic food and such a wonderful time! It was such a treat to get to eat pancakes outside of our house and have pizza! (Not to mention that they tasted amazing!!!) We hadn’t had pizza, spaghetti, or pancakes outside of our house since being diagnosed. (We took this trip 3 or 4 years after being diagnosed and have now been gluten free for 14 years.)

At Disneyland, we met another great chef, named Edgar. We absolutely loved him. He was so disappointed that our gluten free girls only wanted to have pizza. He wanted to make the whole family prime rib (it wasn’t even on the buffet menu), of course, my husband and I gratefully accepted his offer!

They sat us in the middle of the restaurant and when they brought the food out to us 6 chefs in full uniform (hats and all) came out carrying our food! We looked and felt like royalty! Especially, since this was a buffet restaurant and everyone else had to get up and get their own food.

In 2006 or 2007, there was a Gluten Intolerance Conference held in Salt Lake City, Utah. Chef Aaron was scheduled as a speaker. I was so excited to finally get to meet the great Chef Aaron! However, he was unable to make it due to a family emergency. 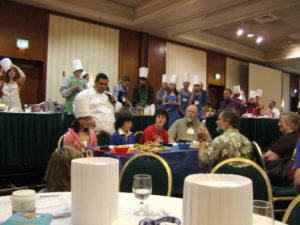 Then, in 2009 my girls and I attended the Gluten Intolerance Group‘s conference in Seattle, Washington. At this conference my daughters not only got to meet Chef Aaron, but they were taught by him and got to cook with him. They loved Chef Aaron!

My daughter felt empowered walking into a fast food place and using the words Chef Aaron taught her: “Do you have a dedicated fryer?”

He also taught my girls to not ask things about “cross contamination”. He explained to them that this is an insult to most chefs. They think of cross contamination as having a dirty kitchen where your foods are in danger of meat juices, where they shouldn’t be.

A better phrase to use is, “Cross Contact”. This more effectively describes what we are worried about. Touching gluten or having a surface touched by gluten that comes in contact with gluten free items. This then, makes them unsafe because of the contact, not because of a dirty kitchen, that should be shut down. 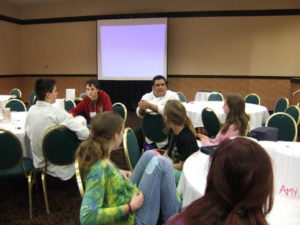 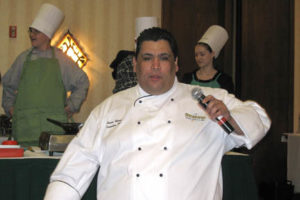 When I met Chef Aaron I thanked him for all he had done at Disneyland. It was such a wonderful experience! He told me that he was happy to hear that it was such a great experience. It is what he was hoping to accomplish with the work he did there. My meeting him was very brief, but it meant a lot to me. I really wanted to thank him and I’m glad I had that opportunity.

I have so much gratitude for all he has done to make the world more accepting of gluten free foods and kitchen processes that make it safe to enjoy these foods.

I am grateful for:

Rest in Peace Chef Aaron, July 24, 2018. Our hearts and prayers go out to your dear family. May they find comfort in their time of mourning.